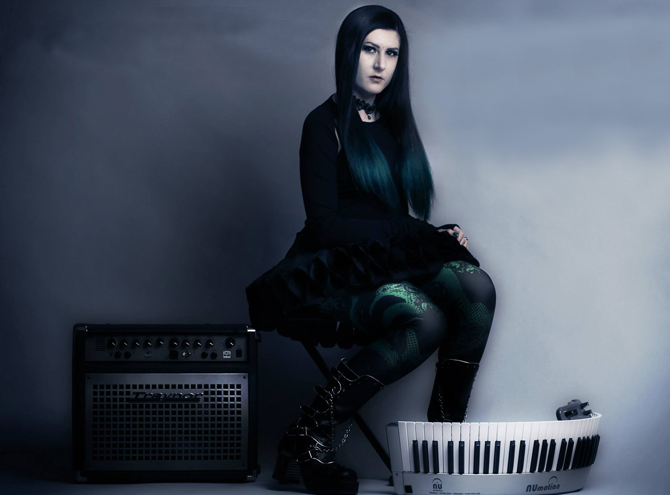 “My Traynor amp is just what I needed. It makes sure my synth sounds make their way to my ears on the big stages through the heavy metal melancholy. And when the set is striped back to my solo work I get the deep warm grand piano sound I crave to display my piece’s emotions.”

From the small town of Oshawa, Ontario, the once average job working musician Schoolcraft has taken leaps and bounds in 2013. After having been discovered and recruited by British extreme heavy metal band Cradle of Filth on live keyboards and backing vocals just after New Year’s, she quickly exchanged small club performances in Eastern Canada for global venues and festivals of plus 10,000 audiences on almost all 7 continents. Immediately she found her home on stage through becoming a live addition to this staple metal band.

Her first solo EP “Rushing Through The Sky” was released in late 2012 under Arcane Records and is stemmed from the softer elements of symphonic metal and rock. Finally, as a solo composer Schoolcraft paints soundscapes of string sections, piano ballads, ambient choirs, and elegant harp segments, all with her voice flying clearly over top. Her music has been compared to artists such as Evanescence, Nightwish, and Within Temptation.

With years of training at the Royal Conservatory of Music, Schoolcraft successfully brought forth the various vocal styles found in Cradle of Filth’s discography to their live act. Having adequate piano studies and the recent addition of the harp, she has transformed into a triple threat as a multi-instrumentalist.

Currently Schoolcraft remains as part of the live line up for Cradle of Filth and an active solo artist-song writer to her own music. Occasionally she appears with Canadian black metal band Daedalean Complex on vocals, amongst other metal band cameos.